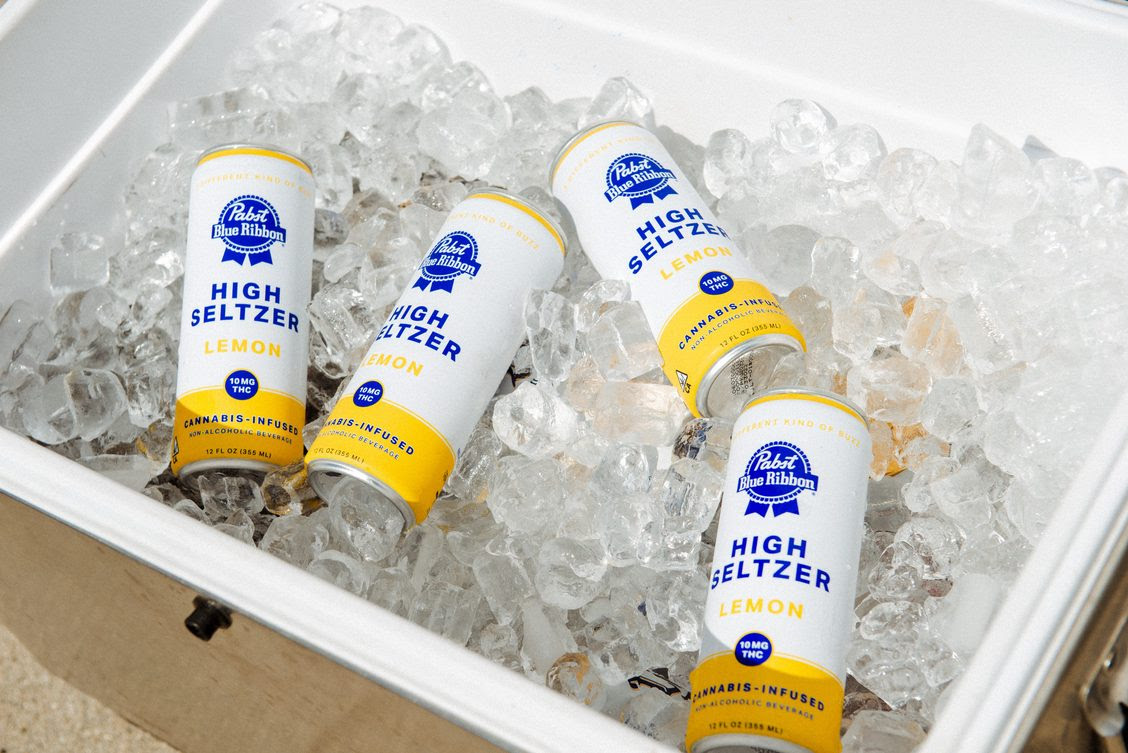 If you were worried about Big Alcohol getting involved in cannabis, we hate to break it to you, but it’s already happened and it’s going to continue happening: Pabst Blue Ribbon, a world-famous beer brand that swears “Pabst Labs” cannabis company is an unrelated venture (*eye roll*) has announced that it’s adding new products to the cannabis beverage line it started in 2020.

The brand started out with a 5mg THC/5mg CBD seltzer drink with a lemon flavor, and the new drinks with the historic ribbon insignia will grow that repertoire to not only include new tastes — strawberry kiwi, raspberry, and mango — but also a 10mg THC version for the same price, aimed at the habitual consumers who couldn’t get a buzz off the original product.

“Since the debut of PBR High Seltzer, more experienced consumers have been outspoken about their desire for a higher THC dose offering,” said Pabst Labs brand manager Mark Faicol in a press statement, as reported by Thrillist. “We’ve been listening and are proud to offer an elevated experience through our new 10mg THC PBR High Seltzer.

Pabst Labs is technically different than Pabst Blue Ribbon or Pabst Brewing. PBR licensed its branding to the weed-seltzer company, which was founded by former PBR employees. This is obviously a sneaky way for the national brand to dodge the fact that cannabis is still, you know, federally illegal.

This is hardly Big Alcohol’s first foray into cannabis beverages, though — and for a very specific reason, we might add. As journalist Amanda Chicago Lewis said in her fascinating and eviscerating 2019 expose of the drinkable sector of the cannabis industry for The Verge, “I discovered the reality is that Big Beer is going after pot drinks because its own industry has been in slow, steady decline for two decades.” (This analysis most certainly applies to PBR’s numbers over the last few years.)

Heineken subsidiary Lagunitas Brewing Company (a similar business set-up that side-steps federal legal issues with a Cali brand) was an early entrant into the cannabis bev game with its Hi-Fi Hops and has subsequently released a terpene-flavored IPA. Molson Coors, Constellation Brands, and Anheuser-Busch InBev have also dabbled, utilizing partnerships with Canadian corporations. They’re all gunning for that $2.8 billion market that analysts say cannabis beverages will comprise by 2025. Hell, even this publication announced the debut of its own mango kush hemp beer for sale in Australia last year.

Pabst says it’s the company’s longevity that will set itself apart in the drinkable weed market. “No other brands in the category can really claim a 175-year history,” Faicol told CNN Business.

Time will tell how the venture will wind up affecting the company’s profile, which underwent a stunning comeback in the 21st century after a shake-up in its corporate leadership — which brought us the aforementioned Portland, Oregon bike messenger rodeo-era. As Thrillist puts it, “PBR seems to be working toward giving you a whole new vibe that doesn’t involve it solely being part of the local bar’s $5 beer and a shot promotion.”

The new flavors will be available in time for summer, and you can snag the 5mg and 10mg Pabst Labs lemon seltzers at certain California dispensaries, and online.

Montana just changed its marijuana law. Here’s what you need to know