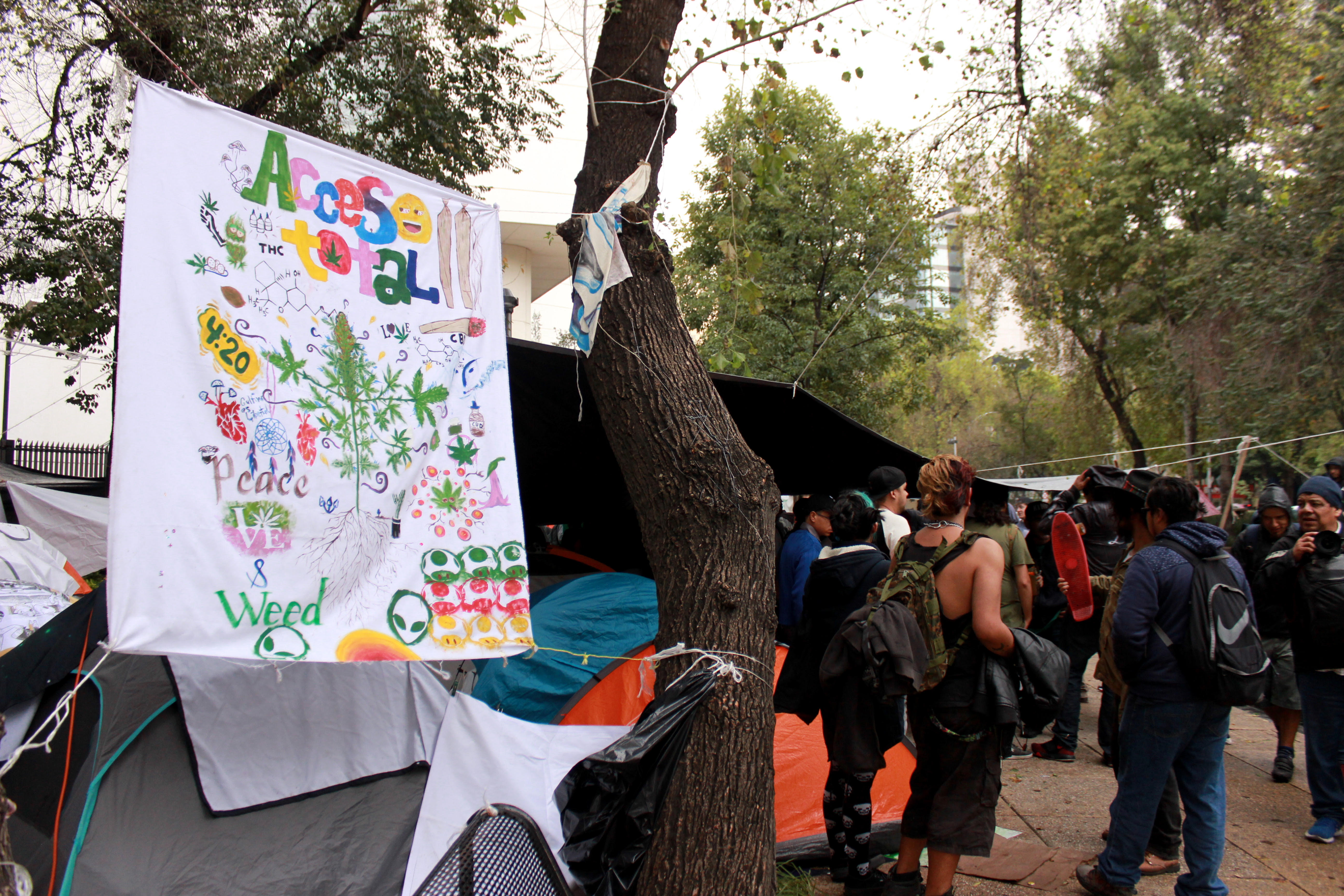 In Mexico, protest camps have emerged as one of the preferred methods of visibilizing the urgent fight for marijuana consumers’ rights. As the legislative process behind legalizing cannabis continues to drag on, more and more “tolerance zones” built by cannabis activists are popping up around the country and inviting cannabis users to consume on-site in the name of federal legalization.

The latest, reports La Dosis magazine, is in the heart of Mexico City.

The new camp is in the Plaza of Information, located just outside of CDMX’s Hidalgo subway station in the downtown Centro Histórico neighborhood. Unlike the year-old, 24/7 Plantón 420 — the prototype for the national weed protest camp movement, which is located in front of the country’s Senate building — the Metro Hidalgo camp, known as Laboratorio 4:20 (Laboratory 4:20), is only operational during the day.

An organizer identified as Abraham told La Dosis, “The idea came from various collectives and people who are in the cannabis movement, with the intention of creating more spaces to smoke where a decriminalization that actually guarantees our rights can exist.”

Personal possession of small amounts of all drugs was decriminalized in Mexico in 2009. But such laws have done little to stop the extortion of the country’s users by law enforcement, who often plant more drugs than the permitted amount on people to obtain a bribe.

The organizers behind Laboratorio 4:20 attempted to set up a residential camp that models the settlement that was established near the Senate, which features workshop space, a community kitchen, and an extensive cannabis jungle that provides passers-by with an educational view of marijuana cultivation.

However, police have reportedly prevented the camp from setting up shop around the clock.

“A few days ago at noon, the police came and they took tents, petitions that had been signed, camaras, an original copy of official documents, copies, tables, material with information about the plantón, backpacks, and well, a bunch of things,” said Abraham.

Plantón 420 has managed to establish a semi-permanent presence in the Senate’s Plaza Louis Pasteur, and in Puebla, activists have maintained a plantón for several months. But other Mexican cannabis protest camps haven’t been as lucky. A team of activists in Monterrey saw its efforts squashed by police who aren’t thrilled to recognize the camps’ establishment of cannabis-consuming “tolerance zones,” among other activities.

For many Mexican cannabis activists, setting up camps in the most populated parts of their city is one of the best ways to spread education about the drug — and keep the pressure on politicians who appear to have lost the will to regulate cannabis legalization.

“It’s important to me that there are spaces like this that promote legalization, because we marijuana users are not delinquents,” said Haziel, a 25-year-old Laboratorio 4:20 activist, to La Dosis. Haziel contends that after police found her smoking weed in the city’s vast Chapultepec Park, officers stuck an ounce of cannabis on her, and she was threatened with a six year jail term.

At the moment, Laboratorio 4:20 organizers have managed to keep the downtown camp open from 3-10 pm daily. They will be attempting to plant actual cannabis plnts in the Plaza of Information gardens, and hope to offer informational workshops to the public in the space.

For more information on Laboratorio 4:20 and to see the live transmissions recorded by  organizers, you can check out the protest camp’s Facebook page.

Masks Off – Marijuana Sales Spiked During COVID-19, But Now What as Masks Come Off?