Not so clever anymore!

The other day I wrote an article entitled, “War of the Brands” where I spoke about the cannabis brands that imitate common Candy Brands’ colors, fonts, and essentially products.

“Doobie snaks!” that look eerily similar to “Scoobie snacks!” or explicit imitations like “Cap’n Crunk” and “Cannaburts” are just the tip of the iceberg when it comes to these copycat brands.

While it may be funny – I warned that there would be serious legal reperecussions to those who are found guilty of brand infringement – and it seems that a dispensary who thought “Budway” would be a clever play on words to the popular sandwichery “Subway” – found out that these multi-billion dollar brands do not FUCK AROUND!

If you were afraid of the black market before – you don’t know how truly ruthless corporate America could be!

Budway found out the Hardway!

For those brands that didn’t heed my warning, here’s a recent example of brand infringement that ended in a judge siding with the sandwich giant Subway.

The judge [Justice Nicholas McHaffie] ordered Budway’s owner to pay the chain $40,000 this week and to destroy any signs, goods, packages and labels marked with the cannabis dispensary’s not-so-distinctive logo.

Although there was no evidence the tiny company actually ate into Subway’s annual $1.8 billion Cdn sales in this country, McHaffie found Budway had effectively tried to borrow on Subway’s reputation to sell its products – according to this cbc article.

“In each case, the word element of the mark is similar, with the similarities in letters and pronunciation between SUBWAY and BUDWAY being self-evident,” McHaffie wrote.

“The fact that ‘budway’ is not itself a word means that it would tend to be read in a manner to connote the common word ‘subway.'”

The judge in question has ruled against a few cannabis brands who have been tip-toeing on similar brands’ reputation – “Herbs R Us” which was a direct ripoff from the company Toys R Us.

Currently, most of these trademark infringements have been happening in Canada, and seeing that the Canadian Tradesmark Act shows a lot of favor to trademarks – it goes once more as a steady reminder that cannabis brands need to differentiate themselves from the market – not imitate.

Building a Brand is Better

Some people may argue, “Subway wasn’t hurt by Budway” and if you come to take a look at Subway’s sales – you are 100% correct.

However, Trademark’s exist for a reason and while you may not be taking away from Subway’s profit margins – you are tapping into their R & D.

You see, Subway invests billions annually to remain relevant within the mind of the masses Every commercial, every social media post, every Youtube video featuring the brand adds to the collective “image” that is Subway.

Thus – when people see the Subway letters, they instantly recognize the brand as “familiar”.

This familiarity with the brand took years, if not decades to garner – and when a dispensary or any other shop, or store – utilize the same;

They tap into this psychological spring of “familiar marketing”. Suddenly, “Budway” feels like you’ve always gone there – and this is where the problem lies.

Budway never asked permission for this privilege and as such – corporate monsters like Subway will easily slap a lawsuit on the dispensary because they will easily win the case.

Why not make $40,000 just because some dude thought it would be funny to make a dispensary similar to the name of a well-established brand.

Are you defending these big brands?

Even if it’s a single dispensary taking the “essence of their brand” and applying it to their market. These brands that have invested billions on propping up their name have every right to protect their investments.

Besides, there is so much cannabis lore to utilize that it’s pretty lazy marketing to siphon off the good name of popular brands.

I may not like what many of these brands represent as a whole – but I do believe that if you take the time to build up a brand from the ground up – that having some sort of protection against copycats is good.

Otherwise you’ll take the time, effort and investment to make a great name for yourself only to have someone else reap the rewards.

What should cannabis brands be focusing on?

As mentioned, cannabis culture is ripe with lore. We have so many angles to utilize within our marketing, it’s really easy to build a cannabis brand.

The problem comes with differentiating yourself form other cannabis brands. There only be so many “brand-a-leaf” companies out there before shit gets redundant.

This is why I wrote the other week about what brands like Monogram and Pokebud are doing – creating over laps between the product and their target demographic.

Right now, it’s not so much about “selling weed” but rather about selling weed to a specific customer. For example, instead of trying to capture the entire market – you could go after fitness enthusiasts who ALSO consume cannabis.

Now suddenly – the potential for marketing is amplified significantly and you can hone in on your perfect buyer.

Cannafit, MariMuscles, etc –  when you have the right target in place, you no longer need to rip off from other major brands.

Thus, the only thing you should be focusing on now is to find “which overlapping demographic” suits best with your brand – and then use those demographical likes to fuel your marketing design.

Cannabis has gone out of the basement and now is mainstream – it’s time you start treating your marketing in the same light. 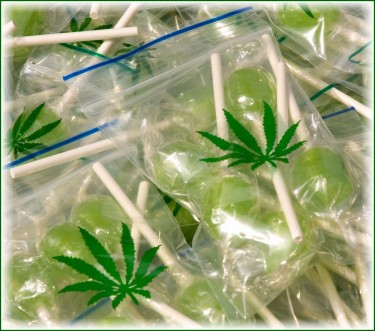 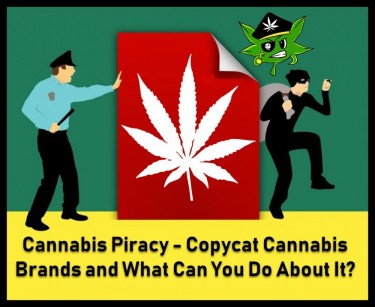 CANNABIS BRAND PIRACY, WHAT CAN BRANDS DO TO PROTECT THEIR NAMES?