The Canine 401k – Pot-Sniffing Dogs are Enjoying an Early Retirement 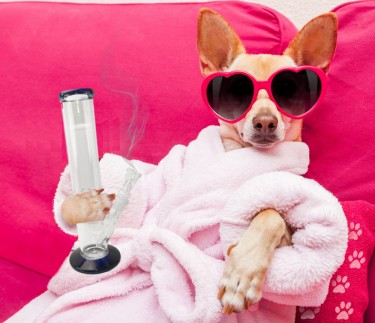 For a very long time, marijuana wasn’t legalized in many states in America. The lack of legalization meant there was an intentional attempt by law enforcement to search people, seize their marijuana and prosecute them for possession of the illegal substance.

To achieve effective search, the law enforcement agents required the services of drug-sniffing dogs. These dogs played a crucial role at the time, fishing out defaulters so they could get arrested. We can say that the “War on drugs” with marijuana as the focus was progressive because of the dogs.

As more states legalize cannabis in recent times, the pot-sniffing dogs are becoming a thing of the past, hence why the dogs are getting into early retirement.

An excellent example of this new reality is the state of Virginia, where law enforcement leaders have set plans in motion to retire 13 dogs. In smaller cities, the police units are also planning on retiring one or two dogs, while some agencies have new plans for the dogs.

Such new plans entail buying and retraining new dogs who can sniff and search for illegal drugs such as heroin, methamphetamines, and cocaine. In some extreme cases, the police units are leaving out the K-9 teams because of the high cost of buying and training the new dogs. It costs up to $15,000 for ab new K-9 unit.

The reality of early retirement

The early retirement plans are suitable for the dogs who will enjoy just being dogs without the extra pressure of “Working” sniffing people and items. However, it isn’t good for the humans who have worked with it for a long time and become a part of the person.

Taking the dogs away to early retirement is tough on the human beings who have spent the most time with them. They spend a good part of their days with the pets, working with them morning to evening, and have built a relationship with the pet.

A famous pot-sniffing dog called Mambo in Cumberland County, Virginia was adopted by one of the officers and doing great enjoying his retirement. It is reported that Mambo is doing great, living an extraordinary life, getting spoiled with his bedroom in a house, and enjoying all the attention. With dogs like Mambo getting adopted and enjoying the moment, the idea of adopting other retired pot-sniffing dogs is gaining popularity.

Currently, six retired marijuana-detecting dogs in Okaloosa County, Florida, live with their handlers. Retirement for these dogs is an opportunity to enjoy the company of officers they considered colleagues and friends while resting at home.

In Massachusetts, recreational marijuana became legal in 2016, and the Quincy Police Department had to shift two dogs from drug detention into patrol work. Eighteen months later, the dogs were retired and placed in the care of pet experts.

Is it possible to teach old pot-sniffing dogs new tricks?

Marijuana is gradually gaining traction and acceptance across the states, with more legalization bills getting positive votes. Legalization means the dogs will be of no use to the force in terms of sniffing marijuana. If a dog sniffs and detects an illegal drug and turns out to be marijuana and not meth, the person who was inhaled may take legal action.

A defense attorney may use this as an argument point to indict the police unit because now that marijuana is legal, no one should be harassed because a dog sniffed it. However, it is almost impossible to teach the dog to STOP detecting marijuana as an illegal substance.

For many years the dog was trained to sniff and detect a range of illegal drugs (including marijuana). Now that the state has legalized it, an officer cannot return and retrain the dog to delete marijuana from his sense of smell. The officer also cannot make the dog focus more on heroin and forget about cannabis.

Once a dog is trained in a certain way, the behavior never goes away. More so, dogs that work closely with law enforcement agencies do not want to make mistakes hence the reason they give the signal barking loudly) once they perceive drugs.

The issue with quantity

In most states, despite impressive legalization efforts, the bills contain stringent laws regarding the amount of marijuana a person can plant, buy or possess at a given time.

This law means that someone who possesses more than the stipulated legal amount is breaking the law and can be prosecuted for it. The big question is, “Can a pot-sniffing dog tell the difference between the legal and illegal amount of marijuana?” What happens when someone has a smaller amount of marijuana, and the dog still flags it as illegal?

Pot-sniffing dogs are 44% accurate, and this is because they were trained to alert the officers of the presence of drugs and not the quantity. The dog will hold a person back from moving forward if he perceives a drug, and when it is discovered that it is the legal amount, it can create conflict.

It is impossible to teach an old animal new tricks, especially one that has spent many years doing the same thing repeatedly. Pot-sniffing dogs were trained to sniff for illegal drugs, which included marijuana before legalization happened.

Now that states are taking the initiative and legalizing cannabis, the dogs will be of no use because people can now move freely with marijuana. Some officers in states where marijuana is now legal to take such dogs into their homes to maintain the relationship they had with them and help the dogs adjust to their new life.

Yes, pot-sniffing dogs are no longer required in states where cannabis now legal: so it is safe to say that they can enjoy an early retirement while the world moves on to embrace marijuana through legalization.

DO VETS THINK CANNABIS CAN WORK FOR DOGS? CLICK HERE!

SHOULD YOU TRY MEDICAL MARIJUANA FOR YOU CAT OR DOG?

Calling all homegrowers: Here are three standout seed strains you’ll want to get to know