Everybody knows that “DRUGS” is the world’s largest and most profitable illicit market.

However, do you know what the second largest black market is?

If you guessed “guns” – guess again. The second largest black market on the planet trailing behind the illicit drug market is human trafficking!

Pulling in an estimated $150 billion annually in profits for traffickers – human trafficking is a robust and highly profitable market, which is evil to its core.

Trafficking involves “transporting someone into a situation of exploitation.” This includes, forced labor, prostitution, organ removal, forced marriages. These are what we refer to as “Modern Slavery”.

I would add in “Drug prisoners” as another form of modern slavery, but this is not the point of this article.

You may be asking by now, what is the point of this article? What does human trafficking have to do cannabis?

Cannabis and Child Trafficking in Scotland

Alex-Cole-Hamilton, a Liberal Democratic Politician and Member of Parliament for Edinburgh Scotland. He recently wrote an article in the Edinburgh News where he outlines the “ugly truth about child slavery in hidden cannabis farms in Scotland”.

In the article, the politician points out that within the illegal cannabis industry, these illegal players traffic children typically from Southeast Asia to the UK, and force them into tending cannabis farms.

These conditions are often dismal and even the thought of trafficking someone to grow weed is quite unsettling.

Up until this point I was 100% on board with Cole-Hamilton’s position on human trafficking – we should totally not do it!

The problem comes when he wanted to shift the blame on consumers.

“This is of course true, but there is another aspect to this story and one that will make uncomfortable reading for many people who enjoy cannabis and believe it to be harmless to themselves and the world around them.”

This statement is something that is often used by politicians when talking about cannabis. “People think that cannabis is harmless to themselves and the world around them…”

This is a naïve outlook on life. Anybody with an ounce of understanding knows that for you to wear those cheap commodities or enjoy the latest iPhone, in all likeliness – there was some form of child labor involved.

Corporations do a damn fine job at keeping consumers ignorant of the dismal realities of production, but the fact of the matter is that most people who work in “production facilities” do so for $1 a day or less.

If this is acceptable within a legal market – it comes to no surprise that within the illegal market, implementing modern slavery is the cheaper alternative. There are no regulations.

However, is this the responsibility of the consumer? Should the consumer “stop consuming” simply because this is happening?

This is what we’re talking about in today’s article – who’s to blame for the bloodshed and pain within the illegal cannabis industry?

Politicians will always blame YOU!

Cole-Hamilton’s position isn’t anything new – politicians have long been playing the “you’re responsible for our fuckups card”.

This is why “you’re carbon footprint” is so important these days!

Because while the major corporations continue to consume our clean water, destroy our forests, make barren our earth, all in the name of profits; you’re the despicable fuck who is destroying earth!

Oh, and forget about asking about the carbon emissions of the military, that’s on a “need to know basis” and you sure as hell don’t need to know!

Just keep on believing that you’re the scum of the earth and the reason why everything is going to shit!

This is politics 101 folks! They did the same with drugs.

The blood of the innocent on your joints

Many of you may not be old enough to remember, but in the 1980s-1990s the D.A.R.E campaigns tried every angle to guilt of shame consumers away from cannabis.

Fortunately, all of their PSAs acted more like commercials to the counter-culture – however, within these narratives you can find the similar blame strategy unfold.

Politicians would cite the horrific deaths and murders that occur because of the drug trade and make you feel like “you’re funding all of this”.

In one way, they do have a point. If you buy drugs from the cartel, you’re giving them money that they use to buy guns, people and politicians.

On the other hand, you didn’t make drugs illegal in the first place. It wasn’t you who sent some of the most lucrative goods into the underground to be regulated by psychopaths who have no compassion for society.

It wasn’t the consumer that established these laws – it was the politicians!

I am writing this article as a means of opening up your eyes to the world that politics work. The politician will always shift the blame to you; it makes them the “solution”.

The truth is, we should remind politicians that it was they that established the rules of the game. You – the consumer, is the last link in the supply chain.

Politicians argue that if consumers were to “just not consume drugs” then  traffickers simply wouldn’t have people to sell to, and thus – you’d end the entire illicit trade.

Except, that’s a ludicrous position to take. One could also argue that if we all just stopped drinking soft-drinks and stopped eating candies, we could significantly reduce Diabetes, hyper tension, etc.

Drug consumption predates prohibition, meaning that the “new kid on the block” is prohibition and if anyone simply “needs to change” – it’s the laws surrounding drugs.

I bet you that if cannabis was legal, regulated and widely available in Scotland – you’d find no trafficked child on a cannabis field. 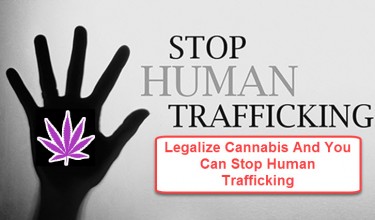 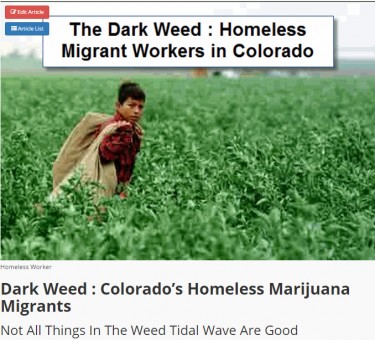 MIGRANT WORKERS IN CANNABIS, WHAT CAN WE DO IN COLORADO?

Petitioners Demand Sha’Carri Richardson Be Allowed to Compete in the Olympics, Despite Positive THC Test