Tripping without Shrooms? – Can Virtual Reality Simulate a Psychedelic Experience? 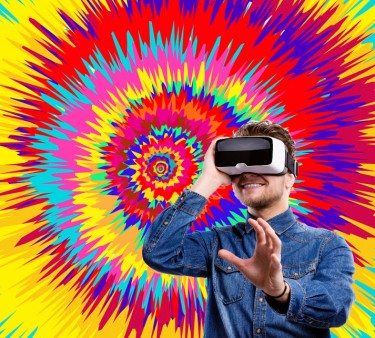 Studies over the years have shown that psychedelics and virtual reality (VR) have analogous functions. Both have been used to alter sensory experiences in the users.

Psychedelics and virtual reality have been utilized with traditional medical therapies to treat conditions like mood disorders, PTSD, and other mental-related conditions.

The main question a lot of people have asked is whether or not either of these substances can be used in place of the other to produce the same range of results.

The Entheos Digital Company, in a bid to position itself at the top of the virtual experience digital space, has invested its resources in trying to answer this question.

Will Virtual Reality Give A User A Psychedelic Experience?

Replacing psychedelic drugs by immersing users into interactive 3D worlds might be the best way to takes users off the potent compounds present in psychedelics.

Over the years the FDA has been looking for ways to bring relief to medical patients without the use of approved medications like psychedelics. This is because patients have come to abuse the drugs while also selling them indiscriminately in the streets.

Entheo Digital hopes to stimulate users into having psychedelic-like experiences with just the use of immersive virtual experience. The future of the world depends on tech. Digital companies will play an unavoidable role in the future of psychedelics.

Entheo has picked up the baton intending to produce an innovative technology to introduce a better holistic approach to psychedelic therapies.

In an interview with the greenentrepreneur reporters, the Chief Executive Officer of Entheo, Robin Arnott, shed light on the company’s research with virtual reality and psychedelic drugs.

Robin Arnott is an award-winning sound designer. He is also recognized in the gaming industry.

In addition to supervising activities at Entheo Digitals, Arnott has been focused on developing his patent known as “SoundSelf”.

SoundSelf has been reported to be a tool that presents users with a dynamic Virtual Reality experience.

For the past few years, Arnott has worked on and tried to improve SoundSelf. When he was developing the tool, he intended for it to be used for virtual reality programs in the entertainment industry. However, the Entheo Digital board recently announced that the SoundSelf protocol will be redirected for use in psychedelic therapy.

Arnott began his interview by speaking about Entheo Digital’s origin and the success the company has achieved since it was established in June 2021.

This is a company that was set up as a means to dispense digital pharmaceuticals that could be used as tools to manage patients who have been prescribed psychedelic drugs. Entheo distributes the therapeutics specifically to psychedelic therapists who can apply them for immersive experiential digital experiences in psychedelic patients.

Robin Arnott stated that Entheo capitalized on the limited availability of digital therapeutics that could be applied in the psychedelic medicine industry. The company’s decision-makers found SoundSelf to be better equipped to serve in the medical scene. In the hands of a trained therapist, SoundSelf could be more impactful than actual psychedelic drugs. He added that the company is focused on upgrading the software to induce therapeutic reactions.

The primary goal of Entheo Digital is to equip SoundSelf with enough software tools for medical use and to develop a reliable network of psychedelic therapists that would test the software.

The software makes use of sound and visuals to induce psychedelic reactions in its users. The sounds could be songs, chants, or tones, while the visuals are images or videos that can respond to every action dictated by the User’s voice.

Arnott said to greenentrepreneur that SoundSelf is dynamic enough to utilize these sounds and visuals to produce psychedelic effects in less than 20 minutes. Users are moved to unitive states of consciousness during which the default network changes and goes quiet. The psychedelic state can more or less be likened to brainwave patterns which are similar to the patterns observed in a person that is either in a deep meditative state or an intense experience with high-quality psychedelic drugs.

Arnott cited an example where he explained the potential benefits of SoundSelf. He gave an instance where a patient experiences anxiety and trepidation on their first psychedelic journey. According to Arnott, SoundSelf can help abate these effects by introducing the patients to a similar state of mind that would be produced during psychedelic therapy. Meaning that patients could skip the intense first experience and still get better outcomes.

Therapists will also benefit from the introduction of SoundSelf into the psychedelic medical industry. The protocol tool would help these trained individuals improve on their service and produce expected results in a lesser amount of time. The corporate side of the industry also stands to gain a lot of revenue.

In recent times,  the biggest hindrance to the growth of the psychedelic medical industry is the limited number of trained therapists skilled enough to make use of traditional psychedelics and digital therapeutics to produce favorable results. With SoundSelf, therapists do not have to do anything asides properly make use of the software. The software is effective in rendering an altered state of consciousness in the patient.

The Virtual Reality that could be offered by Entheo Digitals through SoundSelf would help deliver psychedelic-like treatment to more patients in record time.

Patients would not have to wait on the FDA to approve the commercialization of new psychedelic drugs, so far they can afford to pay for digital therapeutics

At first, it might seem difficult to regulate the prices attached to digital therapeutic, but with time and more funding rounds from interested investors, it would be affordable and accessible to all.

Entheo has a potentially disruptive digital tool on its hands

HOW TO MAKE SURE YOU HAVE A GREAT PSYCHEDLICS TRIP, READ THESE TIPS!

COYOTES STEAL A BAG OF MUSHROOMS AND TRIP BALLS, READ THIS!

Delta-8 THC poisonings? The CDC’s warning isn’t what you think