Sorry Surgeon General – There is Value in Locking People Up for Marijuana Use, Just Ask the Senate 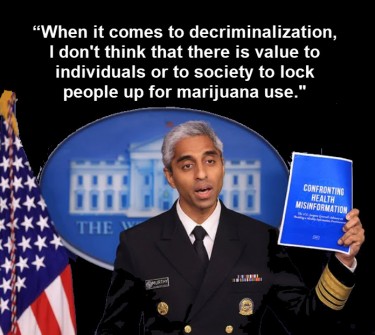 You may have seen the headlines read, “Surgeon General says there is no value in locking people up for marijuana” thinking, “Wow, that’s a progressive stance!”

There is value in locking people up for marijuana – the value just isn’t for “The People”. It’s for the government!

And if you think I’m bullshitting – well, keep on reading. I’ll walk you through the intrinsic value of prohibition for the institutions that benefit from its existence.

What the Surgeon General Said…

This is the first tidbit I’m going to focus on because it’s from here we’ll be starting our journey through the bureaucratic clusterfuck known as “prohibition”.

If there was “no value” in locking people up, odds are we would have stopped doing it decades ago. Think about it, why would we perpetuate something that provides “no value”.

We wouldn’t – which means, some value is obtained from locking people up. We’ll get into more specifics further below.

Murthy also added, “I do think that, in terms of our approach to marijuana, I worry when we don’t let science guide our process in policy-making.”

The problem with this second statement is that science has never been “guiding” the process of policy making when it comes to drugs.

In fact, “Science” under the Shaffer Report – highly recommended the Nixon administration to NOT prohibit cannabis because it was relatively benign to other legal drugs.

Science also were used as a means of perpetuating myths that are still affecting policy these days. For example, The Rhesus Monkey Experiments in the late 1970s were empirically false.

Jack Herer exposed this in his book “The Emperor Wears no Clothes” where the scientific “methods” used were not an accurate depiction of what was published in the study.

Dr Heath forced his test monkeys to consume the smoke equivalent of over 60 cannabis joints in just 5 minutes via a gas mask daily for 3 months instead of 30 joints per day for 1 year (as he had reported).

And here we have an example of SCIENCE guiding policy. Bunk science, but science nonetheless.

Locking People up has Value to the Political Class

Right now, we have shown that “science guiding policy” isn’t always the best thing – we also need “reason” and “logic” and a factor of “flexibility” in order to make a good public policy.

However, the premise of this article is focusing on the intrinsic value of locking people up for cannabis. Which brings us to the political class.

Right now, there’s a group of politicians working on removing cannabis from the Controlled Substance Act. While you would think that it would be a no-brainer to move ahead with legalization considering the gargantuan support for cannabis legalization across the board – you’d be wrong!

Here’s a snippet from the publication JDSupra,

The legislation faces a long road ahead, even among Senate Democrats. Several moderate Democrats are expected to oppose the criminal justice portion of the bill, including those six Democrats who voted against similar House-sponsored federal marijuana legislation at the end of last year. Almost all Republicans will certainly oppose the draft bill, especially the provisions involving expungement and resentencing. In addition, the draft bill is likely to receive pushback and criticism from those who wish to keep federal marijuana legalization a race-neutral issue, as the draft bill openly aims to “make recompense to communities of color and the poor for damage from years of restrictive federal drug policy.” – SOURCE

Oh and let’s not forget about the leftist savor of America – Joe “lock’m-up” Biden, President of these here United States who’s press Secretary said, “Nothing has changed” in regards to the president’s take on legalization.

The answer lies in the money!

The TRUE VALUE of locking people up for marijuana…

When Quentin Tarantino made Django Unchained, he made a comment about “prohibition be the modern form of slavery” and he wasn’t wrong.

You see, when people are “locked up” for a crime – they lose their rights. In fact, the 13th Amendment of the United States clearly dictates the value of locking people up.

If you need a refresher, here’s the 13th Amendment;

Neither slavery nor involuntary servitude, except as a punishment for crime whereof the party shall have been duly convicted, shall exist within the United States, or any place subject to their jurisdiction.

By locking people up for cannabis, the United States government – Federal and State facilities, can exploit the prison population to produce goods.

The number one “buyer of prison goods” is….the United States Government! They “pay” these slaves (prisoners) cents to the hour, and have them work long shifts because they are within their legal right to exploit these people for manual labor.

The reason the political class doesn’t want to remove cannabis from the Controlled Substance act is because they would lose a major part of their “free workforce”.

Not to mention, most of the politicians – INCLUDING THE PRESIDENT – benefitted from the War on Drugs. They received money from prisons, police unions, rehabilitation centers, pharmaceutical companies, etc.

Politicians know that by ending cannabis prohibition, they are going against the wishes of their patrons – and don’t ever think that they are serving you…far from it, these guys are in the pockets of big business, who use the government to exploit the planet, people and create policies that restrict the individual’s ability to fight the power.

While from a social perspective there is no value for locking people up – we know that there is money to be made…why else would drug cartels have grown so big under prohibition? How else would the police gain the rights to “arrest your house” because “drugs were on it”?

How else would the United States Federal Government be able to create legal slaves for their prison machine? How else would Joe Biden have made his political career and his “tough on crime” approach?

While it’s “nice to hear” that there is no value in locking people up for cannabis – the truth is that there is a lot of value…just not for you or me! 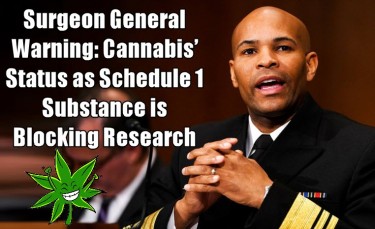 Cannabis nurseries are taking off, providing seeds and clones to growers