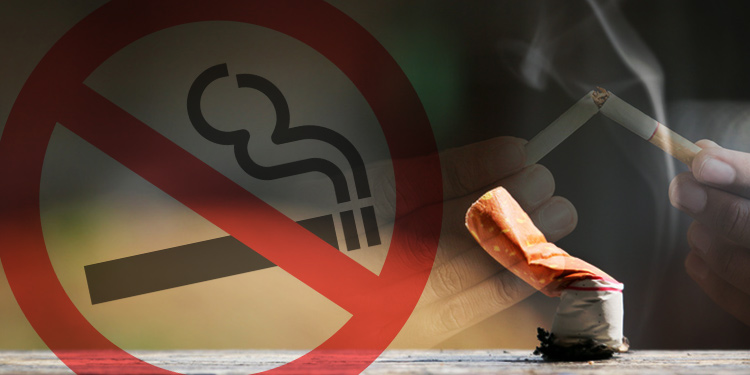 Jacek Olczak, the CEO of massive tobacco enterprise Philip Morris, just urged the UK government to ban all cigarettes — yes, including its own Marlboro brand — within a decade, the Guardian reports.

Olczak believes that cigarettes should be treated like gasoline-burning cars, which are slated to be banned from 2030 onwards in the UK in an attempt to cut greenhouse gasses. “[I] can see the world without cigarettes… and, actually, the sooner it happens, the better it is for everyone.”

Many smokers in the UK allegedly believe cigarette alternatives are worse for lung health than cigs, Olczak told the Sunday Telegraph. That’s why he believes a mandated government ban would end the confusion felt by smokers once and for all. “Give them a choice of smoke-free alternatives … with the right regulation and information, it can happen 10 years from now in some countries. You can solve the problem once and forever.”

All of this sounds like a crock of shit, honestly. Your head would have to be lodged so far up your ass to not know cigarettes — what people often refer to as “cancer sticks” — are acutely harmful to human health. Seriously, who is confused about this?

No one, probably. It turns out that Olczak and the Philip Morris team are actually pivoting the brand into a “healthcare and wellness” conglomerate. Yep, you read that disturbing sentence correctly. Philip Morris International (PMI) — a company that’s sold trillions of cigarettes — is jumping into the wellness world. Philip Morris International confirmed this by saying it wants half its turnover to come from non-smoking products with executive pay tied to its new mission to “unsmoke the world” by phasing out cigarettes.

A separate Philip Morris executive also told Bloomberg earlier this year that the company might incorporate cannabis into its “Beyond Nicotine” smokeless cannabis line. The logic behind this strategy is to help combat declining cigarette sales and diversify its product range to include botanical sleep aid, energy-boosting, or calming smokes. And although the company has yet to finalize these plans, cannabis could easily fit into the picture.

“We are doing all this work and will determine one day what avenues to pursue,” said former CEO Andre Calantzopoulos to Bloomberg back in May 2021. “But our priority is what we’re doing with our smoke-free products, and that’s where I would stay on cannabis.”

The conglomerate has come under fire from anti-smoking activists who see the move to “ban cigarettes” in the UK (and eventually the world) as nothing short of hypocrisy; a sly move to save face and make money by pursuing other avenues. And they’re not wrong: PMI launched a £1bn takeover bid of Vectura, a British pharmaceutical company that makes asthma inhalers. Yes, that means Philip Morris now owns a pharmaceutical business that sells inhalers. This is somehow darker than 1984.

Anti-smoking campaigners argue tobacco companies are positioning themselves as part of the solution for a smoke-free world, while continuing to sell and promote cigarettes. Whether you’re the one directly inhaling smoke or huffing it secondhand, cigarettes kill roughly eight million people a year, according to the World Health Organization.

Tobacco firms have been quick to move into cigarette alternatives such as vapes, e-cigarettes, and cannabis. Thankfully, Senate Majority Leader Chuck Schumer’s new cannabis legalization bill includes provisions to keep massive alcohol and cigarette companies, like Philip Morris, from dominating the US cannabis market. Too bad we can’t keep their fetid money out of the weed game entirely.

Cannabis nurseries are taking off, providing seeds and clones to growers