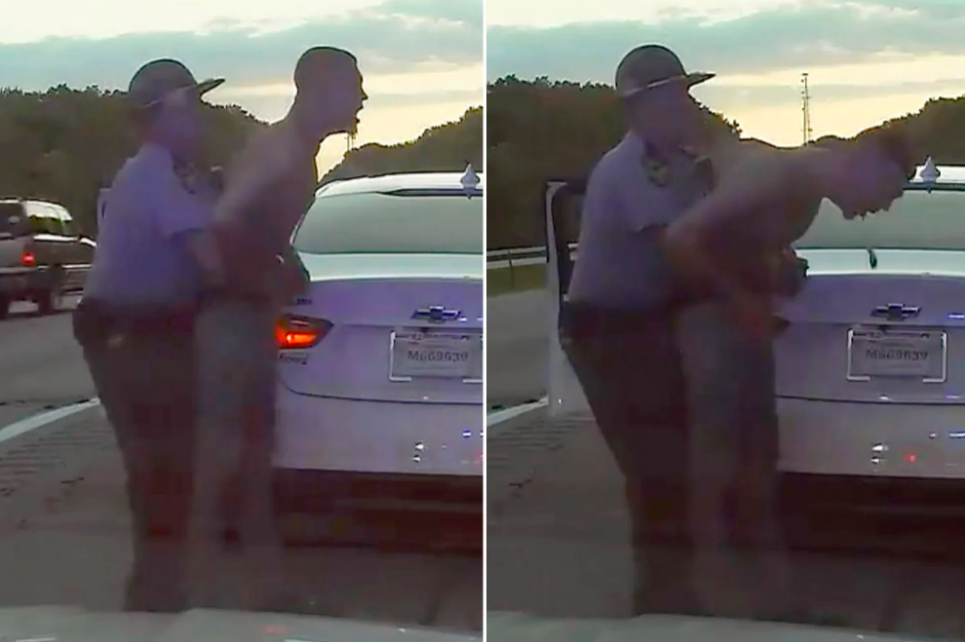 Pretty much every pothead has had a stoned run-in with the cops. But in Ohio, one man almost died trying to avoid getting busted for possession.

Last month, Ohio State Trooper Charles Hoskin pulled a man over for a routine traffic stop. When approaching the vehicle, the cop saw that the shirtless driver seemed to be choking on something. Dashcam video released by the Ohio State High Patrol (OSHP) shows Hoskin asking the man if he can breathe as he exits the vehicle.

Moving to a safe distance behind the car, Hoskin performed the Heimlich maneuver on the driver, dislodging a small bag from his throat. In the video, the cop can be seen asking the suspect what he had swallowed, at which point the suspect admitted that he had a gram of weed on him. The driver apparently swallowed the weed, with the baggie intact, in order to avoid getting busted for possession.

The cops couldn’t resist the urge to popularize this bizarre story, and posted the dashcam footage to Twitter along with a warning about swallowing contraband drugs. “Don’t try to swallow a bag of drugs prior to getting pulled over in an attempt to keep a trooper from finding them,” the OSHP wrote. “Luckily, Tpr. Hoskin from our Ravenna Post was alert and able to assist the man who was choking on a bag of illegal marijuana.”

Ohio definitely has its share of weird stories involving weed and cops. In 2019, one man even called his local police department to complain that cops stole 4 grams of “prestige fucking weed” from his wife. Apparently, the man heard that the nearby city of Cincinnati recently decriminalized up to 100 grams of pot, and mistakenly believed that that decriminalization law applied to his county as well. It didn’t.

Of course, there’s a simple solution that would prevent weird situations like this from happening: Legalizing cannabis entirely. Last month, state lawmakers filed a bill that would do just that. This bill, which is the first full legalization bill to ever be introduced into the state legislature, would create a taxed and regulated adult-use retail market and allow former offenders a chance to clear their criminal records.

The 180-page bill would allow adults 21 and over to possess up to 5 ounces of weed and to grow up to 12 plants at home. Legal sales would be taxed at a relatively low 10 percent, and this revenue would go to fund K-12 education, infrastructure, and municipalities or counties that opt-in to allowing legal weed businesses.

“This bill is much needed in Ohio, and it’s time for Ohio to become a national leader in marijuana decriminalization and legalization,” said Rep. Terrence Upchurch (D), Marijuana Moment reports. “This bill is more than just about legalization, it’s about economic and workforce development, it’s about decriminalization, and it’s about healthcare! The time is now, and I look forward to getting this done in a bipartisan fashion.”

The Buckeye State already has a thriving medical marijuana industry, and several local municipalities have decriminalized weed, but it remains to be seen whether state lawmakers are prepared to embrace full legalization.

Allen Iverson finally gets his flowers

Is NFL Player Julio Jones One of the Biggest Black Market Weed Dealers in California?