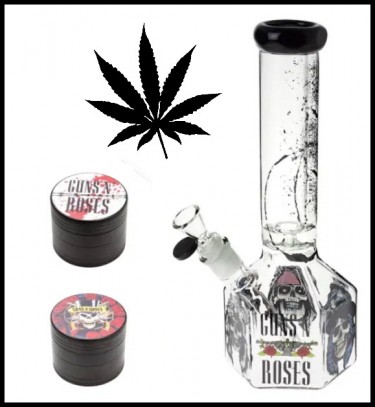 The music group ‘Guns N’ Roses’ has added more merch to their portfolio. This time they decided to delve into cannabis.

From being ambassadors for cannabis businesses to owning their cannabis companies, the celebrities are doing a lot for the industry.

Guns N’ Roses are joining a long list of notable celebrities to own valuable stakes in cannabis companies.

Famous folks getting into the cannabis business unlock the industry for more investors and customers.

This is a legendary American band that was famous in the late 80s for their hit metallic sounds. The band was formed in 1985 and got signed to Geffen Records in 1986. Under the record label, it released its first studio album titled ‘Appetite for Destruction.

The band’s music has topped charts over the years and according to Billboard chart history, they have over ten songs on Billboard’s Hot 100 list. On September 10 1988 they had their first Number 1 billboard track, Child O’ Mine.

In 1992, their track November Rain peaked at the top three. Their most recent album, which was released in 2008; Chinese Democracy, cost over $10 million to produce. It holds the record as the most expensive rock album to ever be released.

It is said that the Chinese Democracy album was recorded and re-recorded by the band in at least 10 different studios. Many producers were employed to master the tracks also.

Despite the band’s long hiatus from releasing music, it made around $45 million in 2019. Forbes placed Guns N’ Roses in its annual Celebrity 100 Earnings list. Apart from promoting their mercy, the band has maintained its earnings without major endorsements or signings.

The celebrated band had released a new line of smoking accessories and bongs. This was released in anticipation of their tour which is set to begin after Summer.

The brand aligned with Famous Brandz to create a range of products which includes bongs, grinders, and hand pipes.

The official line of cannabis merchandise will be available in States across the U.S

The available products in the collection include six designs of smoke accessories. Two bongs, various designs of grinders, and two unique styles of hand pipes.

The products are very unique as they have iconic artworks of the band’s members on the labels. Superfans of the band and rock music lovers would very much appreciate the designs inscribed on the accessories.

The glass bongs are also designed with artworks from the best-selling’ Appetite for Destruction album.

Now you can inhale your smoke with Axl Rose’s face on your smoke delivery device. What more could a superfan of the band ask for?

These products could also be gifted to these fans by family members and friends.

Prices of the products

The products can be bought online and in licensed cannabis stores across the country. The prices of the bonds sell at less than $100 each. The other products in the collection— 2 grinders and 2 hand pipes— have a retail price range between $24.99 to $29.99. The dab rigs also sell for $99.99 each.

Prices could differ by a few dollars depending on the store’s location and delivery mode.

This company is well known for partnering with other cannabis accessories brands.

Famous Brandz is a manufacturer of cannabis accessories, their glass water pipes are some of the best smoke delivery accessories in the market.

They have partnered with other celebrities, like Cheech, Chong, and Snoop Dogg, to launch highly rated cannabis paraphernalia in the past.

Days after the smoking accessories were released, fans jokingly said that the Guns n’ Roses group were no longer onto music, but rather into merch.

For thirteen years the group had not released any music, as the group members had gone their separate ways for a while. Guns N’ Roses decided to surprise their fans with new music on the thirteenth of August.

The song, Absurd, is a remake of an unreleased song called “Silkworms”.

Absurd debuted during the band’s concert at Fenway Park in Boston. The band also performed the song live, after which Axl Rose addressed the audience to state just how much fun he had while performing.

Guns N’ Roses have a tour scheduled for fall. The North American Tour got paused for a while and is set to resume.

The band has released its itinerary, shows will be held in Las Vegas, Phoenix, New Jersey, Atlantic City, and other states. For now, a total of 14 tour dates have been announced and fans are thrilled.

By October, the tour would be concluded. The band will perform ” absurd” at one of the shows during the fall.

Fans are thrilled they will get to witness the great Axl Rose and Slash, the team’s guitarist.  Wolfgang Van Halen will also be performing. Sales have begun.

Another tour has been set for the summer of 2022. The band will be going around Europe.

The cannabis industry is big enough to contain the many artists and celebrities that have taken an interest. As more cannabis legislation is being passed in the U.S, more VIPs will decide to dip a toe into the booming industry of pot.

California’s Guns N’ Roses are not the first to invest in cannabis merch, and they won’t be the last. With their upcoming tours, they stand to make a lot of money not only on ticket sales but also on their clothing and smoking accessories merchandise.

If you are a fan of their music, there’s a bong in the collection that says “Hey, I love Guns N’ Roses too. Have fun.

510 vape cartridges to enjoy Labour Day, without the work