Ganja Theories – Does Your Weed Have a Vibe to It? 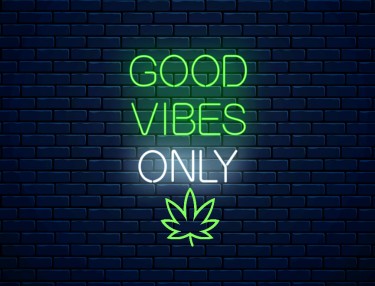 I once went to a Holocaust Museum where all sorts of horrific events were displayed on walls – highlighting the evils of humankind. One of the more impactful displays during this exhibition was an actual rail car used in World War II to take prisoners to concentration camps such as Auschwitz.

The moment I stepped into the space, a cold shiver ran down my back. I could feel the fear and anxiety and immediately empathized with the victims of the atrocious event in a manner I had never before experienced.

The vibe of the past was entangled with the physical object I was standing in. It was a surreal experience.

We often feel “vibes” and say things like “That person gave me a weird vibe” or “that house has a strange vibe”.

This made me think about other things that may have vibes and as I examined my own life, I eventually started thinking about cannabis.

I have smoked weed from many different sources – from home growers to buying cartel weed on the streets, and if there is one thing that I can say – weed also has a vibe!

First, let’s talk about “low vibrational weed” or as some call it “Brick weed!” Brick weed predominantly is grown and sold by Mexican Cartels. It’s produced in mass and can be purchased for about $90 per kilo. In some places, you can get it even cheaper.

Cartels notoriously don’t give a fuck about what they put into the weed, they don’t cure it, they simply grow it till maturity, hang it out to dry and spray it with chemicals to kill the scent. Then, they package it into square bricks and ship it out for export and sale.

If you’ve ever had the displeasure of smoking this kind of weed, you’ll notice certain effects;

I remember when drug warriors tried to convince consumers that “by buying weed they are indirectly killing people” because Cartels would use the funds to buy weapons which would then kill police trying to stop the trade.

While this is a bit of stretch trying to guilt consumers to stop buying, there is the element of “vibes” when it comes to this weed. If you’re smoking a plant that had no “love” and was purely grown for commercial purposes – it’s the same as eating processed foods that were taken from factory farms.

The energetic signature about the environment in which it was cultivated affects the plant.

If a plant can be affected by the vibrations of music – enabling them to grow more, then how much does the emotional fields of the humans cultivating the plants affect it?

Of course, this is not a scientific position (yet), but from a purely subjective perspective – cartel weed seems to have a very low vibrational activity.

The best weed I ever smoked was weed I grew. I once cropped out a small yet very potent plant that knocked my socks off. I took two little hits and was high for 4 hours.

My friend who also tried my weed said, “This isn’t weed, it’s drugs!” complimenting the high he was feeling.

Even though the plant was grown under CFL lights in a small grow box I built, I would spend days and nights observing it, making sure that everything I could do to help it out was done.

After a while of growing, the final result was “OMG THIS IS FANTASTIC!” The vibe of this weed was light, it was energetic, it had substance.

We would engage in long philosophical debates about existence and other things. While we could simply chop it up to “the genetics”, I have a theory that my intention behind growing the plant also affected it somehow.

The reason I say this is because when smoking commercial weed – I can feel the difference. Of course, this is all subjective in nature and to prove this scientifically would be very difficult, but this is why I wrote about this as “Ganja Theories”.

This series of blogs is all about thinking about crazy things and seeing if we can make some sense of it – intellectual thought experiments.

Commercial weed is certainly far better than brick and has a higher vibration, but depending on whether the weed was grown by a local grower who takes care of their crops – or some industrial farm trying to maximize profits – you’ll taste the difference.

Perhaps I’m just high and writing about some nonsense, but I wanted to extend this question to a greater public – to my fellow tokesters!

Personally, after more than 20-years of smoking, I have had the opportunity to smoke thousands of different strains from different sources.

Considering that water can alter its structure through intention as was outlined by the Masuru Emoto’s study in the 1990s, which was then tested in a double-blind study in 2006– then indicates that intention does affect the material plane.

Since cannabis utilizes a lot of water, could this “trap the intention” of the environment and alter the structure of the water inside the weed plant?

This is the bases of this Ganja Theory discussion. Just like I could feel the eerie vibes of a holocaust train car – could the environment and the intention behind a crop alter the vibe of weed?

Perhaps, in the world of cannabis cultivation – intention actually matters!

GETTING TO HIGHER VIBRATIONS WITH CANNABIS AND MEDITATION!

NBA players can exhale without worry of random weed tests

How to pass a hair follicle drug test with detox shampoo